Hi, my name is Travis Summerton, the Managing Director and sole Building Inspector of Summerton Building & Inspection. I have lived in the western suburbs my whole life and cannot imagine ever leaving. The West Lakes lake and Rowing Club, pristine beaches and sea breezes, the duck ponds, rowing, kayaking and paddle-boarding, amazing walking trails, coastal bike rides, lush parks and playgrounds, solid established homes, plenty of subdivision opportunities, the new West development, cul-de-sacs with no passing traffic, the mall and local shops, and amazing restaurants… in my opinion the West is the Best, and it’s only getting better!

My parents bought one of the first released blocks in West Lakes Shore in 1976 and constructed an Alan Sheppard Spanish Mission bungalow. I went to West Lakes Shore primary school, played footy at the West Lakes Footy Club, and spent all my free time exploring the neighbourhood on my BMX. There is not a backstreet of West Lakes and its surrounding suburbs that I am not familiar with. When my parents decided to downsize, my wife and I bought the family home and we are now so blessed to be raising our two kids here – in the same house, in the same neighbourhood.

I have conducted thousands of building inspections all over South Australia and have yet to find an area that offers a lifestyle comparable to West Lakes Shore.

From a professional viewpoint, the soil is ideal for building; cracking and structural issues are rarely found and some footing beams are the smallest allowed in the AS2780 Residential Slabs Australian Standard! West Lakes is sinking some say! I can tell you that is an outright falsehood and likely rooted purely in jealousy. Why build anywhere else? The West is the Best and West Lakes Shore is its premium location! Most of the original homes – although now dated – are still very solid structures and many are renovated successfully. I am constantly amazed at how many people are willing to spend upwards of $1m in the eastern suburbs for an old, rundown ‘character’ home on clay soil which will inevitably become a money pit. A million-dollar budget in West Lakes Shore will buy a new mansion surrounded by water just 25 minutes away from the city!

From a personal viewpoint, having lived here all my life, West Lakes Shore is a family-friendly, safe community with countless amazing walking trails and kids’ play areas between the lake and the beach. We love the secluded safe waters of the West Lakes Shore beach in summer, and enjoy walking our dog and riding our bikes (yes, I still ride a BMX) whenever we can, exploring the local area.

Don’t get burned in an unregulated industry. I am an insured, licensed Builder (BLD268703), Building Works Supervisor (BLD266833) and extensively experienced Building Inspector based in West Lakes Shore.

I offer a superior expert professional inspection service with an emphasis on communicating with you throughout the process. I provide industry-leading same-day detailed reports formulated upon the AS4349.1 Australian Standard which are replete with photographic images. I always make the time to ensure that you completely understand what you are buying by either meeting you on-site at the inspection’s conclusion, or by phoning you post-inspection to fully explain the report.

My background in domestic and commercial building is richly diverse; from client liaison, designing/drafting of working drawings and estimating, through to seeking development approvals, material procurement, and site management/supervision. I have conducted thousands of pre-purchase, staged progress, pre-handover, problem analysis, and pre-lease residential and commercial building inspections all over South Australia.

I am also an executive committee member and the elected treasurer of the Association of Building Consultants (ABC), and a full member of the Housing Industry Association (HIA).

Please check my Google Reviews to see what people say about me, and validate my licences with Consumer and Business Services SA.

Call now and speak to me directly on 0438 416 461. During the day I am usually onsite conducting inspections which require my absolute focus and attention. Unfortunately this means I cannot always answer my phone, but please leave me a message and I will return your call as soon as I possibly can. Alternatively you can book online on my website and I will then contact the agent to schedule the inspection on your behalf at the earliest opportunity and will let you know once all is comfirmed. 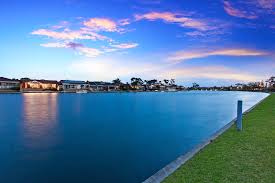 The concept of a man-made inland harbour development was first attempted by Frederick Estcourt Bucknall in the 1880s who constructed Estcourt House.

Unfortunately his attempt at this development failed, with the local area remaining a swampy, marshy polluted wasteland and dumping ground, with residents of surrounding areas complaining about the snake population.

In 1959 Delfin Ltd purchased the land and development plans were proposed including a channel linking the lake to the sea through the sand dunes near Estcourt House, the lake providing a haven for small pleasure craft and other aquatic sports.

Swamp reclamation began in 1970. Ten million tonnes of earth was shifted to form the man-made lake, and heavy compacting machinery was utilised throughout the entire West Lakes/West Lakes Shore area in preparation for pending construction. A pipe was built to carry seawater from the gulf to the lake, and the lake was also designed to receive stormwater runoff from the surrounding areas. The lake was filled in 1974.

West Lakes Shopping Complex was originally called “Olympic City” and included a proposed rail link to Port Adelaide. The first stage of The Mall complex (including the Library) opened in 1974.

The first football match for premiership points held at Football Park (AAMI Stadium) was played between North Adelaide and Central districts in May 1974. Central Districts won. In the Grand Final that year Sturt defeated Glenelg. In 1976, a record Grand Final crowd of 66, 887 watched Sturt beat Port Adelaide – the record was possible because the seating had not been completed, so most of the crowd was forced to stand. In November 1983 the Council gave formal approval for the erection of four 50 metre towers at AAMI Stadium. Work started almost at once, official “light up” was made in March 1984.

Delfin Island was opened in 1978. It was originally about three kilometres long with a freshwater lake, planned for ‘prestigious living for 5,000’. Island Point was opened in 1982. It created a record for the sale of subdivisions in South Australia with 70 per cent of the land being sold within the first fortnight.

In 1991 the West Lakes project was crowned the ‘best Real Estate project in the world’ by the French-based International Real Estate Federation.

It’s certainly an amazing story. If you are reading this and are looking to purchase property but not considering West Lakes Shore as a place of residence, why not reconsider? In my opinion, it’s the best place to live in the world, and I wouldn’t live anywhere else.

Contact SBI now for all of your building inspection requirements!